Telescopic Crane Boom: Heavy cranes, such as telescopic cranes, can be mounted on top of a truck and then driven to those places where goods and loads need to be moved.

The main difference between a telescopic crane and other conventional cranes is that the former has a hollow boom that contains several tubes mounted on one side and another.

A hydraulic mechanism allows the movement of elongation and refraction of the beam.

Truck in charge of transporting the crane depends on each model. Support of the crane, the cabin, the pen; transports all the weight, in the van placed the stabilizers and the superstructure, thus relieving the efforts.

To maneuver the load, the boom must be able to move to the right and to the left, as well as up and down.

Beneath the operator’s cab is a Rotex gear on a rotating platform bearing that rotates at 2 revolutions per minute (rpm).

It is powered by a bidirectional hydraulic motor mounted in the cab and housed in a metal cover to prevent injury.

The rotation is controlled by a pedal hydraulic in the cabin.

The most recognizable part of any crane is the boom. This is the steel arm of the crane that holds the load.

Rising just behind the operator’s cab, the boom is the essential piece of a crane, allowing the machine to lift loads to several dozen feet. Most hydraulic truck cranes have a boom that has several telescopic sections

Some arms are equipped with a feather, which is the lattice structure attached to the end of the arm. As the load is lifted, the sections extend to the desired height.

All this equipment is controlled by the operator inside the cabin, which is located at the top of the deck.

Crane operators use various control mechanisms to raise and lower the boom, turn the boom and boom, wind and roll the winch and control other peripheral equipment.

The hydraulic crane has two basic types of controls to maneuver a load:

Pedals: These pedals are responsible for retracting and extending the telescopic sections of the boom. They also control the amount of pressure generated by the pump.

The joysticks and pedals are connected to hydraulic hoses that connect several hydraulic cylinders to the spool valves.

When a joystick is pushed in one direction, the valve closes one of the hydraulic hoses that lead to the ram and opens the other.

The way the joystick is pushed determines whether the piston in the hydraulic ram slides in or out.

The reel valve system allows the crane operator to control the hydraulic pistons.

Hydraulic truck cranes are used to lift heavy loads at high altitudes, and it is important that the truck is completely stable during the lifting operation.

The tires do not offer the necessary stability, so the truck uses stabilizers that act as scales to prevent the crane from leaning too far to one side or the other.

The stabilizers use the hydraulic system to lift the entire truck, the tires and everything from the ground.

Sometimes, “floats” are placed under the platform to dissipate the strength of the crane and the load on the concrete or pavement. Floats are usually wooden boards that line up to create a base that is larger than the pad.

It consists of four extensible feet with its respective hydraulic system. The stabilizers are only one mechanism used to balance the crane during lifting operations.

There are also removable counterweights that can be placed on the back of the crane at the bottom of the cab.

These counterweights prevent the crane from tilting forward during the operation.

The amount of counterweight needed for a particular lift is determined by the weight of the load, the radius of the boom and the angle of the boom during the operation.

Counterweights are only used during lifts; They have to be removed before the truck can be driven.

Reinforced steel cable lines run from a winch just behind the operator’s cab, extending up and over the boom and arm.

The lines go up the pen and adhere to a goalball; It keeps the lines taut when there is no load on the hook.

Grove was founded in 1947 and is one of the world’s leading producers of mobile hydraulic cranes with manufacturing facilities in Shady Grove, Pennsylvania, and Wilhelmshaven, Germany.

How do mobile cranes work?

Through a combination of simple machines, mobile cranes are able to gain mechanical advantage to lift heavy objects. The mast (the tall vertical part of a crane) is supported by a large, heavy base, which helps offset the weight the crane holds at higher heights.

At the top of the mast, there is a slewing unit, consisting of gear and motor, which allows the crane to rotate. The slewing unit also contains the jib (a long horizontal working arm) that uses a trolley to help carry the load, as well as a shorter machinery arm that contains the crane’s motor, along with large concrete counterweights to help balance the load. In addition to these simple machines, mobile cranes also utilize a pulley system, which helps the crane lift heavier loads with minimal force.

What is a Knuckle Boom Crane?

The boom of the knuckle crane is a device designed to lift and distribute loads suspended from a hook. They are equipped with a means of propulsion able to produce the necessary movement to enable their movement on public roads and land. 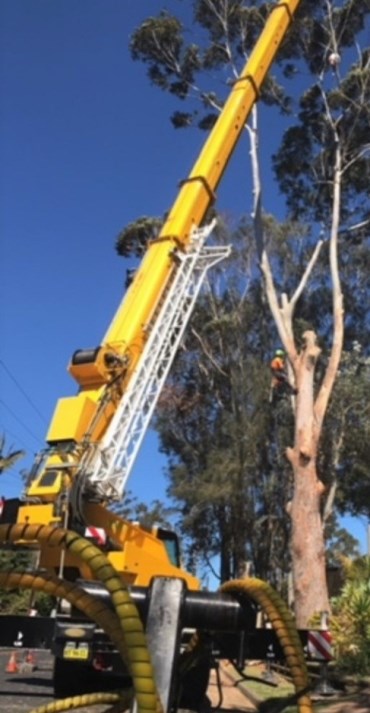